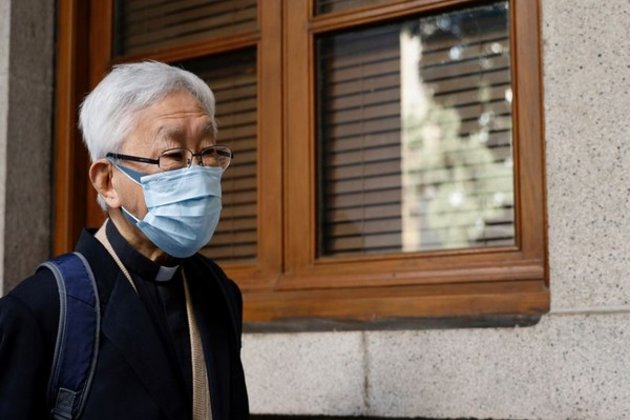 Hong Kong, May 13 (ANI): Amid rising fears that Beijing would begin instituting closer control over the church in Hong Kong, the detention of a 90-year-old retired bishop of Hong Kong cardinal Joseph Zen, prompted an immediate outcry from international human rights leaders along with calls for the government to uphold religious freedom in the city.

Shortly after the new security law in Hong Kong was implemented on June 30, 2020, Cardinal Zen said that while he would remain prudent, he was prepared to suffer arrest and trials under the new law.

Notably, the Hong Kong national security law, officially the Law of the People's Republic of China speaks of "Safeguarding National Security in the Hong Kong Special Administrative Region." However, Hong Kong's 2020 security law made participating in or supporting the pro-democracy movement crimes of subversion and collusion with foreign organizations and allowed for those remanded to be extradited to mainland China.

Punishment ranges between a minimum of three years and a maximum of life imprisonment.

The cardinal was detained and held by the national security police for his support of anti-government protesters, reported The Catholic Register, the oldest English Catholic publication in Canada.

"If right and proper words were considered against their law, I will endure all the suing, trials, and arrests. Numerous predecessors have endured similarly," he said in a video posted on his Facebook page.

Cardinal Zen has publicly delivered detailed critiques of Beijing. He has been close to other high-profile dissidents and has gone as far as sleeping on the streets with student protesters.

Beijing has a history of arresting and jailing priests and bishops, with a number still unaccounted for in recent decades. The detention of Joseph Zen came months after the state-run media attacked his activism in a series of articles.

The cardinal and three other trustees of the now-defunct 612 Humanitarian Relief Fund were detained separately on May 10 and May 11, and all were released on May 11. The fund was set up to offer financial assistance to those involved in anti-government protests in 2019 and was disbanded after coming under scrutiny by authorities over the past year.

The cardinal and others were interrogated in the Wan Chai police station for allegedly colluding with foreign forces. After the cardinal's arrest, the Diocese of Hong Kong said in a statement, "We have always upheld the rule of law. We trust that in the future we will continue enjoying religious freedom in Hong Kong under the Basic Law."Chris Smith, co-chair of the Tom Lantos Human Rights Commission and ranking member of the Congressional-Executive Commission on China said, "Criminalizing freedom of expression as 'sedition,' casting legitimate international engagement as 'collusion with foreign forces,' and suppressing people of faith for their religious, social and political beliefs is designed to make engagement with Hong Kong human rights and democracy leaders impossible, as the CCP is determined to make Hong Kong a de facto province of the People's Republic of China," Smithsaid.

He also called on the Vatican to "raise its voice regarding this outrageous attack on the independence of the church in Hong Kong," as per the publication.

Smith said the arrests "just days after Beijing loyalist John Lee became Hong Kong's next leader underscores the Chinese Communist Party's determination to eradicate the rule of law in once-free-and-democratic Hong Kong."A tweet from the 2022 International Religious Freedom summit called the arrest "on charges of 'collusion w/foreign forces' -- a deeply troubling development in China's ongoing crackdown on advocates of democracy and now, apparently, on religious leaders."Notably, Cardinal Joseph Zen reassured Catholics he is fine after being detained and held by the national security police for his support of anti-government protesters.

"I have spoken with Cardinal Zen," Hong Kong Bishop Stephen Chow Sau-yan wrote on his Facebook page. "He told me to let his friends know that he is fine. Not to worry. And he wants us to take a low-profile approach for him," he added. (ANI)