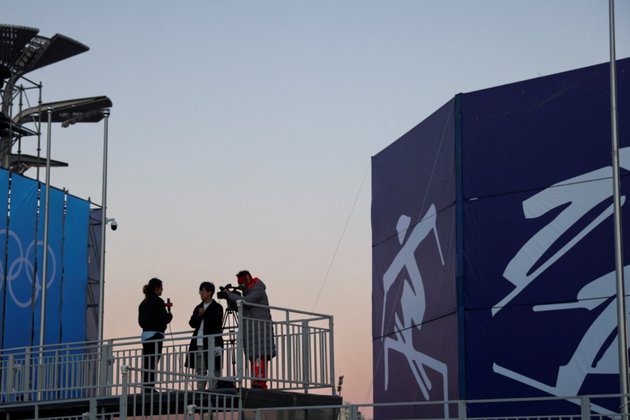 With the Beijing Games just two weeks away, media rights groups are calling attention to China's record of jailing journalists.

In its latest monthly listing of the world's most endangered journalists, the advocacy group One Free Press Coalition - a collective of more than 30 media outlets and rights groups - allots all 10 spots to journalists jailed in China or Hong Kong.

Topping the list are Jimmy Lai, the founder of Hong Kong's now shuttered pro-democracy paper Apple Daily, and Zhang Zhan, a lawyer turned reporter who has been imprisoned since May 2020 for covering the pandemic in Wuhan via YouTube. [

China has been the leading jailer of journalists for three consecutive years, data from the New York-based Committee to Protect Journalists shows. As of December 2021, at least 50 journalists were behind bars for their work, including some imprisoned for coverage of the pandemic.

"Is that the kind of environment in which the International Olympic Committee feels you can have a free and open Games, where athletes can compete and that celebrates the Olympic ideals?" said Steven Butler, CPJ's Asia program coordinator. CPJ is part of the One Free Press Coalition.

When Beijing hosted the Games in 2008, "China made a lot of commitments that it didn't keep," Butler told VOA. "For the good of the Olympic movement, [the IOC] ought to be very cautious about going to a place like China."

The U.S., Britain, Canada and other countries announced diplomatic boycotts of the Games because of Beijing's human rights record. China responded by saying Washington should "stop politicizing sports."

In an email to VOA, the IOC's media relations team said that the committee "Recognizes and upholds human rights as enshrined in both the Fundamental Principles of the Olympic Charter and in its code of ethics."

But, it added, "The IOC has neither the mandate nor the capability to change the laws or the political system of a sovereign country.

The email said that the IOC is striving to advance its human rights work, and that it works closely with the organizing committee of each Games on issues including labor conditions, diversity, environment, media coverage, and the right to protest.

"With all that we are seeing from Beijing 2022 with regard to these obligations, at this stage we have no reason to doubt their implementation," the email said.

But, the IOC added, "Given the diverse participation in the Olympic Games, the IOC must remain neutral on all global political issues.

Globally, the pandemic has allowed for greater government control over information, and China is not alone in jailing reporters for critical coverage, international rights groups have found. But with the virus highly transmissibly in confined spaces, it puts the lives of those detained for speaking out at greater risk. 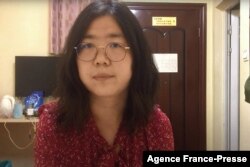 FILE - This file screengrab taken on Dec. 28, 2020 from an undated video shows former Chinese lawyer and citizen journalist Zhang Zhan as she broadcasts via YouTube, at an unconfirmed location in China. (AFP Photo / You Tube)

Journalists who are in poor health, like Zhang, are at particular risk.

The RSF Courage in Journalism awardee's health has worsened after she staged hunger strikes in prison. The 38-year-old was hospitalized for 11 days in August.

Despite lingering health issues reported by her family, Zhang was returned to prison, where human rights groups say she has limited access to health care or adequate nutrition.

Zhang's brother Ju has said that the journalist's weight dropped to under 40 kilograms.

"The doctor had warned me in August that she could die if she continues her hunger strike," Zhang Ju told VOA in November. "Prison authorities have restrained Zhang and force-fed her with a tube."

US Calls on China to Free Citizen Journalist Zhang Zhan

The U.S. State Department and rights groups including PEN have called on Beijing to free Zhang.

'Zhan should never have been imprisoned in the first place. Her only apparent 'crime' was documenting life in Wuhan in the early stages of the COVID-19 pandemic," James Tager, PEN America's research director, told VOA. "Now, amid continued concerns over her deteriorating health, we face the appalling realization that Zhang's life is literally at risk, all as a consequence of the Chinese government's willingness to treat her independent reporting as a crime deserving of years-long imprisonment."

When she was convicted of "picking quarrels and provoking trouble" in December 2020, the court proceedings lasted only three hours. PEN International said at the time the trial did not meet global standards.

At that point, Zhang had been in custody for at least seven months and was already in poor health. She appeared in court in a wheelchair, according to PEN.

Zhang has been imprisoned for over 18 months, but others on the One Free Press Coalition list have been detained far longer, including Uyghur blogger Ilham Tohti, who was detained in 2014, and Uyghur Gulmire Imin, who has been imprisoned since 2009 after reporting on riots and protests in the Xinjiang autonomous region.

The list also includes Haze Fan, a reporter for Bloomberg who has been held in pretrial detention for over a year, and journalists from Hong Kong.

Alongside Lai, who was convicted for his involvement in pro-democracy protests and is awaiting trial on separate charges under Hong Kong's national security law, the One Free Press Coalition lists radio journalist Wan Yiu-sing, who was arrested by the city's police in February 2021.